The Portal Bridge is a movable rail bridge over the Hackensack River in New Jersey between the cities of Kearny and Secaucus. The two-track, moveable swing-span was built by the Pennsylvania Railroad and is currently owned and operated by Amtrak. It originally opened in 1910 in conjunction with service to the newly constructed Pennsylvania Station in New York City. The 100-year-old bridge is in disrepair, limiting train speeds, and is so low that it often has to be opened to allow commercial boats underneath, causing more delays. 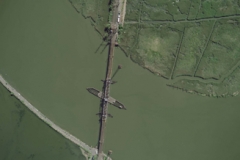