For this Port Authority Traffic Study, RAS obtained digital still and video imagery of the NJ approach to the George Washington Bridge at a specified “rush hour” time. The time-stamped video imagery was captured using a helicopter, enabling the flight crew to linger in a specified area. This was a “pilot project”, and the best methodology for obtaining imagery showing traffic movement through a given region was tested and determined to be effective.

To this end, the RAS team utilized a helicopter, mounted with two video cameras (one on each side of the aircraft) to collect data, using one helicopter maintaining a fixed-position hover one mile above the Fort Lee survey area (proposed as approximately 3 x 1.5 miles. Our team used the 3-camera “WAV” system, acquiring 1-second time-lapse aerial photographic coverage (1-sec. TLAP) and hovered over the Rt. 46/4/1&9/I95 Interchange for four half-hour periods, one half-hour each at 5,500 ft. 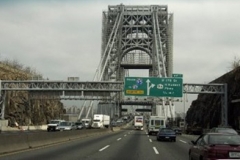