The Goethals Bridge is essential to moving cargo between airports and seaports and regional markets in the New York/New Jersey metropolitan area. As part of a complex surface transportation, network, its strategic location places it at the center of one of the largest air cargo gateways in the nation and provides truck and auto connections between the New Jersey Turnpike, Routes 1 & 9 and other New Jersey highways,the Staten Island Expressway (I-278), and the Verrazano-Narrows Bridge. More than $33 billion of regional goods pass over the bridge each year. Eastbound traffic totaled over 14 million vehicles in 2009. Since 2001, the Bridge has provided corridor redundancy for national security and homeland preparedness.The Port Authority has embarked on a project to provide the design, build, finance, and maintenance for the replacement the 80 plus-year-old Goethals Bridge. 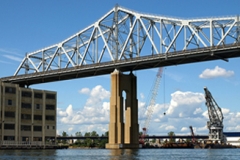 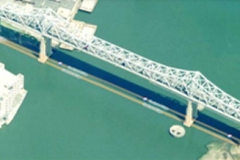